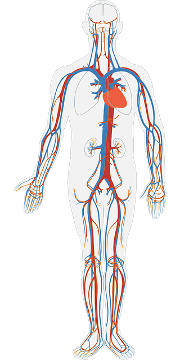 No organ quite signifies love like the heart. The heart is at the center of our circulatory system; an all-embracing network responsible for the movement of blood, nutrients, hormones, oxygen, and other gasses.

Without the circulatory system, the body cannot maintain homeostasis, which is the body’s way of managing a constant internal environment when dealing with external changes. For example, the body sustains a consistent pH and a steady body temperature during a hot summer day. Now that’s kind-hearted.

Learn about the mechanism behind the “Lub-Dub”—how the heart develops; how the blood flows through the heart; and where the blood goes after it exits the heart.

The heart pumps from about four weeks after conception and never stops until a person dies.

The heart develops in four phases:

The blood flow before birth is more complicated than after the baby is born. The placenta is doing the work that the lungs do after birth. Before birth, the fetus receives oxygen and nutrients through the placenta via the umbilical cord from the mother. The lungs are bypassed via an arterial trunk that originates from the ventricles, called the truncus arteriosus.

Two divisions of the circulatory system

Mechanisms of the cardiovascular system 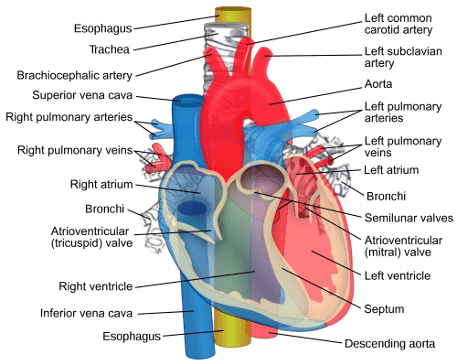 The hollow fist-size organ is a muscular organ that contracts to force blood through the body. Even with all the enormous workload of the heart, the adult heart only weighs between 8–12 ounces.

The heart sits behind the breastbone, between the lungs, and slightly to the left in the chest cavity.

The fully developed heart rests in a compartment called the pericardial cavity that is protected by the surrounding ribcage and the diaphragm. The pericardium is a membrane-like sac that secretes fluid to lessen friction as the heart beats.

The heart wall is composed of three layers:

The average heart rate changes through the human lifespan:

The myogenic heartbeat originates from the sinoatrial (SA) node—a natural, intrinsic pacemaker—within the heart itself rather than from specific nerve impulses.

The heart cannot generate its own rhythm. Without extrinsic neural (autonomic nervous system) or hormonal influences (endocrine system), the SA node pacing rate would be around 100 beats per minute.

The heart rate and cardiac output, however, must alter under varying circumstances in response to the demands of the body for oxygen and nutrients. The nervous system, hormones, and other factors influence this action.

Electrical signals instruct the ventricles when to contract by impulses passed down to the purkinje fibers, modified muscle cells collectively known as the bundle of his.

Three components of systemic circulation include:

Another term for pulmonary circulation is bronchial circulation. It supplies blood to the tissue of the larger airways of the lung.

When a person takes a breath air comes in via the nose or mouth then travels down the trachea, also known as the windpipe. The air then passes through the bronchial tubes, or airways, and into the lungs for gas exchange, or diffusion, to take place—carbon dioxide is expired while oxygen is absorbed.

Complete blood flow cycle through the heart, body, and lungs: 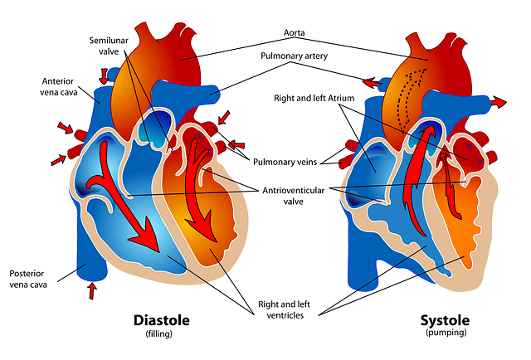 Two phases of the cardiac cycle:

Blood passes through valves that act as one-way inlets for blood flowing into a ventricle and one-way outlets for the blood leaving a ventricle. The four valves of the heart open and close at precisely synchronized times during one heartbeat.

The four heart valves include:

The valves open and shut, as the heart muscle contracts and relaxes—this lets the blood flow into the ventricles and atria at alternate times.

The order of circulation through the valves is as follows:

Blood stays contained in the closed circulatory system and flows in one direction. The path does not change:

Blood vessels, except capillaries, have walls made of the following three layers:

Arteries transport oxygenated blood from the heart to the capillaries within an organ. The thick walls, elastic fibers, and smooth muscle enable them to sustain the high pressure of blood pumped from the heart.

The force exerted on the walls is known as blood pressure. Each artery has an elastic recoil of its fibers that cause it to spring back after blood passes through, which is a secondary circulation that decreases the workload of the heart.

The aorta has the largest diameter and carries oxygenated blood from the left ventricle to the body, except for the lungs.

Arterioles branch into networks of tiny narrow vessels known as capillaries. These have thin walls and a large surface area to aid in diffusion, which consists of the exchange of oxygen and nutrients between the tissues and the blood. The narrowing of capillaries slows the movement of the blood to allow more time for diffusion.

After leaving the capillaries, deoxygenated blood feeds into very small veins called venules. The veins, in turn, transport the blood back to the heart.

Similar to arteries, the walls of veins contain smooth muscle; however, veins are more flexible because the walls are thinner and less elastic.

Larger veins contain valves to maintain the flow of blood—this is important when blood flows against the force of gravity.

Complete blood flow through the heart and vessels of the cardiovascular system:

Hypertension (HTN) — is when the force of blood against the arterial walls is greater than it should be.

Hypotension — is when the force of blood pushing against the walls of the arteries is lower than it should be.

Atherosclerosis — the buildup of cholesterol, fats, and other substances in and on the walls of the artery.

Arteriosclerosis — the thickening and hardening of the artery walls, commonly occurring in old age.

Hypercholesterolemia — high amounts of cholesterol in the blood circulation.

Congestive heart failure (CHF) — a chronic condition in which the heart does not pump blood as well as it should.

Coronary artery disease (CAD) — a disease or damage in the major blood vessels of the heart.

Arrhythmia — a condition in which the heart beats with an abnormal or irregular rhythm.

Dysrhythmia — often interchanged with arrhythmia; it is an abnormality in the rhythm of the heart.

Fibrillation — is an irregular heartbeat (arrhythmia) that has a quivering characteristic; atrial fibrillation (A-fib) is the most common arrhythmia.

Myocardial infarction (MI) — blockage of blood flow to a part of the heart causing damage to the heart muscle; otherwise known as a heart attack.

Angina pectoris — chest pain caused by a reduction of blood flow to the heart.

Ischemia — an inadequate blood supply to a part of the body or organ, especially the heart.

Stroke — damage to the brain from lack of blood supply.

Aneurysm — a localized enlargement, or bulge, of an artery caused by a weakening of the artery wall.

Embolus — an air bubble, piece of fatty deposit, a blood clot, or other object that becomes lodged in a vessel.

Deep vein thrombosis (DVT) — a blood clot in a deep vein, commonly occurs in the legs, especially after surgery or in someone who has decreased mobility.

Atrial Septal Defect (ASD) — a hole in the septum between the heart’s upper chambers, the atria; present at birth.

Ventricular Septal Defect (VSD) — a hole in the septum between the heart’s lower chambers, the ventricles; present at birth.

Patent Ductus Arteriosus (PDA) — a congenital defect of the heart characterized by an opening between two blood vessels leading from the heart.

Mitral Valve Prolapse (MVP) — improper closure of the valve between the upper and lower left chambers of the heart.

Endocarditis — an infection of the inner lining of the heart, usually involving the valves.

Myocarditis — inflammation of the middle layer of the heart wall.

Pericarditis — an irritation and swelling of the thin sac-like membrane, the pericardium, that surrounds the heart.

Oxygen saturation (O2 Sat) — is the fraction of oxygen-saturated hemoglobin, a red protein that transports oxygen, relative to total hemoglobin (unsaturated + saturated) in the blood.

Anemia — a condition in which the blood doesn’t have enough red blood cells or hemoglobin.

Hypoxemia — a low concentration of oxygen in the blood.

Echocardiography — the use of ultrasound waves to investigate the action of the heart.

Cardiac catheterization — is a procedure used to diagnose and treat cardiovascular conditions through insertion of a catheter into the vessels of the heart.

Angiogram — an X-ray that uses a special dye to check the flow of blood in an artery or lymph vessels.

Venogram — an X-ray that involves injecting contrast material into a vein to show how blood flows through the veins.

Phlebotomist — a person who performs phlebotomy, which is the process of making a puncture, known as a venipuncture, in a vein with a needle.

Erythrocytes — a red blood cell that is typically a biconcave disc without a nucleus. Erythrocytes are red because of the red pigment of hemoglobin.

Platelets — colorless disk-shaped cells, without a nucleus; they plays a major role in clotting and is found in large numbers in the blood.

Please contact us at support@PacificMedicalTraining.com to reach the author and recommend other facts or terms that interest you.

Kid’s guide to the circulatory system

A history of the heart

Differences in the development of coronary arteries and veins

Aging changes in the heart and blood vessels