Insulin is a hormone made by the pancreas, one of the body’s endocrine organs. Insulin assists the body in turning blood sugar, or glucose, into energy—this process plays a significant role in the body’s metabolism and various aspects of memory and cognition. It also helps the body accumulate and use energy stores for use at a later time when the body demands it. Each organ differs in the way they use fuel to meet their energy needs, such as the brain, adipose tissue, or fat cells, muscles, kidney, and liver. Over the last few decades, researchers have determined that insulin affects the body’s energy stores and eating behavior by way of the central nervous system (CNS).

How does insulin regulate energy and brain function?

After a person eats, blood glucose increases—this rise in blood sugar triggers the pancreas to secrete insulin into the bloodstream. Insulin travels through the circulatory system to the body’s cells—it tells the cells to open up and let the glucose inside. Once within, the cells turn glucose into energy or store it for later use. The body cannot utilize or store glucose without insulin—instead, the glucose stays circulating in the blood. 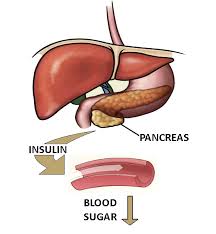 The pancreas is about 4.7 to 7.1 inches (about 12 to 18 centimeters) long and weighs roughly 70 to 100 grams—about the weight of one medium sized banana. The pancreas does not look like a banana, however. It is made up of a head, a body, and a pointy tail. The position of the pancreas is behind the stomach in the upper abdomen.

The two main functions of the pancreas are:

Insulin and glucagon are the two essential hormones that orchestrate energy storage and utilization—they are produced by the islet cells in the pancreas. Islet cells are in clusters throughout the pancreas. Insulin and glucagon are a part of a feedback system that keeps blood sugar levels stable. The pancreas releases insulin when blood glucose levels are high; on the other hand, glucagon is released when the concentration of blood glucose falls too low. Glucagon causes the stored glycogen in the liver to convert to glucose, which is then released for use in the bloodstream.

Insulin and disorders of the pancreas

The most common types of diabetes are:

In type 1 diabetes, the pancreas is not making the needed insulin. The immune system attacks and destroys the cells in the pancreas that produce insulin—this is known as autoimmunity. Type 1 diabetes is diagnosed in children and young adults, although it can arise at any age.

Other types of diabetes

Less common types include monogenic diabetes, which is an inherited form of diabetes, and cystic fibrosis-related diabetes.

A person can develop hyperglycemia when the pancreas produces an insufficient amount of insulin or the body’s cells are resistant to the effects of insulin, termed as insulin resistance. Complications can occur if the blood sugar stays elevated for extended periods of time.

Each person’s treatment will vary, not only on the type of diabetes but also more individual-specific treatment differences. The aim of diabetes therapy is to keep blood glucose levels near to normal as possible.

Treatment and education should address medical, lifestyle (exercise and diet), and psychosocial issues. People with insulin insufficiency or dysregulation of the insulin/glucagon axis, such as in type 1 diabetes and type 2 diabetes, are intolerant to carbohydrates. Therefore, restriction of carbohydrates should play an integral role in managing these conditions. Diabetes education, such as knowing how insulin works, is also an essential part of self-management. 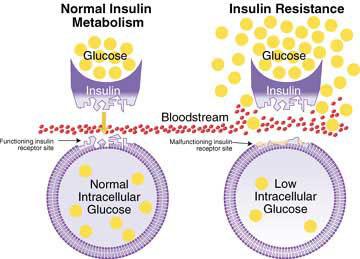 People with type 1 diabetes make little to no insulin because the beta cells in their pancreas are damaged or destroyed. Therefore, these individuals will need insulin injections to allow their body to process glucose and avoid complications from hyperglycemia.

People with type 2 diabetes do not respond well to the insulin produced by the pancreas, or they are insulin resistant. Type 2 diabetes is oftentimes managed with oral medication and lifestyle changes, such as diet and exercise. Sometimes supplemental insulin injections are needed to process the sugar adequately.

How to administer insulin

Insulin can be administered by syringe, pen, or pump according to the person’s preference and health-care provider’s advice.

An insulin pen is convenient and portable; it is a single unit that combines a very fine needle and an insulin cartridge—this makes it easy to give different kinds of insulin at different times of the day. Each type of insulin needs a separate pen.

Insulin syringes also have small needles with a special coating to decrease discomfort upon administration. If the health-care provider prescribes two types of insulin at the same time, the insulin can be drawn up into one syringe, or the insulin may come premixed. Caution is advised when mixing insulin types—detailed instructions must be followed for how to prepare each dose.

Insulin pumps that are worn outside of the body, are a reliable, efficient way to deliver intensive insulin therapy. The device comprises a small catheter, which is inserted under the skin, and a pump, which is about the size of a pager. The pump has an insulin storage and can be programmed to give small quantities of insulin on a routine schedule. If extra doses of insulin are needed, such as at meal times, the person presses a button on the device.