Did you know the skin can communicate? Often, the study of nonverbal communication ignores the skin; however, skin changes show what is going on in the brain and in other organ systems. When a coworker returns from a sunny destination they don’t have to announce it; the skin will do that for them. Want to determine who is dehydrated? Simply pinch the skin of their hand and when it doesn’t snap back—it is time to hydrate—this is known as skin turgor.

First responders and emergency department personnel assess the skin to let them know how a patient is doing. The skin shows when there is a lack of oxygen, noted by a bluish discoloration of the skin, called cyanosis. The skin also shows when there has been a trauma or when someone has an allergic reaction. If the skin is blistered or scalded, perhaps there has been an excessive heat, chemical, or radiation exposure. Even before the person can verbalize it, the skin is already sending a message that there is an issue. The skin responds to emotions quite quickly. For example, the skin, which is very vascular, responds through vasodilation, when someone is anxious or embarrassed. 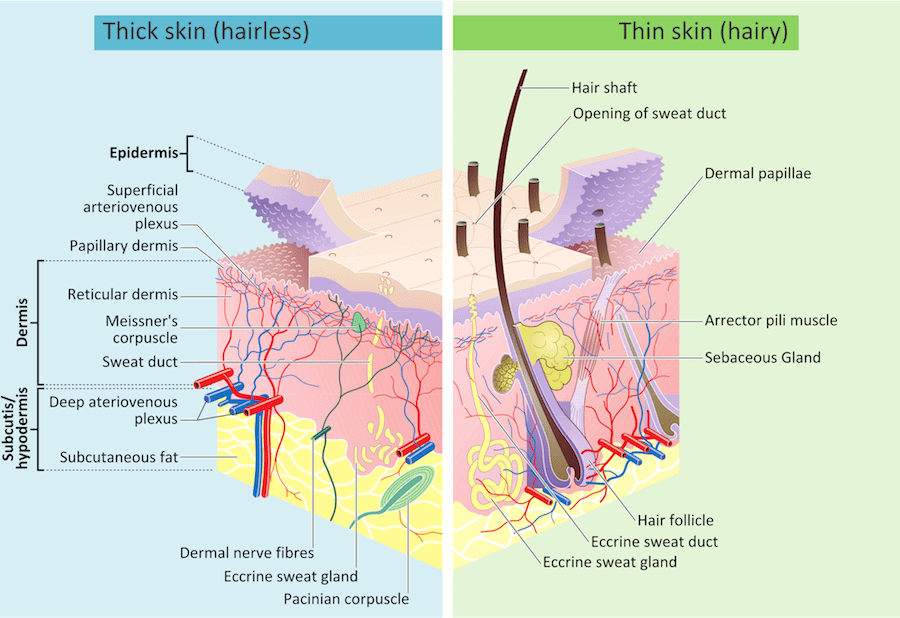 Integumentary System: The Largest Organ System in the Body

The skin makes up approximately 16% of the body’s total weight—it is the largest organ in the body. Without the skin’s protective barrier from the external environment, the body is vulnerable to infection, injuries, and much more.

The skin defends against microorganisms, such as bacteria and parasites, and all the potentially harmful microscopic things that shouldn’t take up residence on or in the body. It excretes salt, water, and organic wastes, thus affecting the body’s electrolyte balance. The integumentary system helps control body temperature through releasing or keeping in heat.

The skin also acts as a water repellent. Without this ability, the body would take in too much water. The skin protects the body from the ultraviolet (UV) radiation of the sun—well, to some degree—sunscreen and sun-protective clothing are still imperative. A little sunshine every day, not only creates the body’s circadian rhythm, but also helps the body synthesize the hormone vitamin D. Your skin contains numerous nerve endings, allowing it to relay the sense of touch, pressure, pain, pleasure, and temperature to the brain. The integumentary system is a responsive organ that reflects the health of other organ systems.

Integumentary System: Layers of the Skin

The integumentary system has two main components: the skin and the accessory appendages. The official scientific name for the skin is termed the cutaneous membrane and has three major layers of tissue: 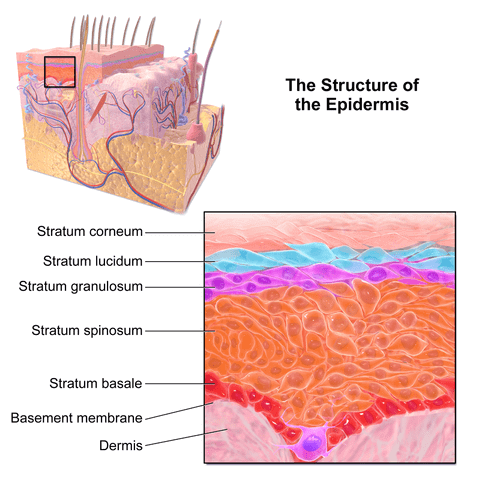 The epidermis is the outermost layer of the skin that protects the body from the environment. It is avascular, meaning it doesn’t contain any local blood vessels—this is why shallow cuts bleed less. The lack of blood vessels means the epidermis gets its supply of oxygen and nutrients through a process called diffusion—they diffuse out of the vessels in the dermis and into the epidermis.

The epidermis regulates the amount of water released from the body through transepidermal water loss. The thickness of the epidermis differs in various areas of skin; it is approximately .05 mm thick around the eye and is 1.5 mm thick on the palms and the soles of the feet.

The epidermis layer is made up of four or five sublayers, depending on the region of skin, which work together to continuously rebuild the surface of the skin:

The innermost layer of the epidermis is known as the basal layer, stratum germinativum, or the stratum basale. It contains small round cells called basal cells. The basal cells constantly germinate, or produce new cells. The new cells continuously push older ones up toward the surface of the skin, where they eventually shed.

The basal cell layer contains melanocytes. Melanocytes produce the skin pigment, or coloring, known as melanin. Melanin is like a defensive shield that protects the deep layers of the skin from the damaging effects of the sun. Sun exposure causes melanocytes to increase the production of melanin to protect the skin from damaging UV rays—this is what produces a suntan. The patches of melanin in the epidermis cause freckles, birthmarks, and age spots. Melanoma emerges when melanocytes undergo malignant, or cancerous, changes. Merkel cells are also in the stratum basale with large numbers in touch-sensitive areas such as the lips and fingertips.

The Science of Skin Color – TED-Ed

The Squamous Cell Layer, or the stratum spinosum, is the thickest layer of the epidermis. This layer contains eight to ten layers of keratinocytes, or squamous cells. The keratinocytes are basal cells that have been pushed upward from the innermost layer of the skin.

Keratinocytes produce keratin, a protective protein that makes up the structure of the skin, nails, and hair. The stratum spinosum transfers certain substances in and out of the body. It also contains cells called Langerhans cells. These cells attach to antigens, or foreign substances, that invade the injured skin and alert the immune system of their presence.

The keratinocytes from the squamous layer are then pushed up through two epidermal layers, the stratum granulosum and the stratum lucidum, discussed below. As these cells move towards the skin’s surface, they get flatter and bigger and adhere together—when these cells fuse together, they create a tough, durable layer—eventually, they become dehydrated, die, and slough off.

The stratum corneum is made up of 10 to 30 layers and is the outermost layer of the epidermis that continually sheds keratinocytes. The stratum corneum sloughs off as new cells take its place—this shedding process slows down with aging. Complete cell turnover occurs every 28 to 30 days in young adults and 45 to 50 days in elderly adults.

What is Skin For? – Video Tutorial

The dermis is located beneath the epidermis and is the thickest layer of the skin—it is 1.5 to 4 mm, making up approximately 90% of the thickness of the skin. The primary roles of the dermis are to control the body’s temperature and to provide the epidermis with nutrient-saturated blood. Much of the body’s water is stored within the dermis.

The dermal layer is made up of two sublayers:

The papillary layer is the upper layer that contains a loose arrangement of collagen fibers. It connects to the epidermis via papillae, finger-like projections. Some papillae contain capillaries, small blood vessels, that nourish the epidermis and help regulate temperature; others contain Meissner’s corpuscles, or sensory touch receptors. The papillae on the finger pads, hands, and the soles of the feet have a double row of papillae that form personal identifying patterns—such as the fingerprint—that keep the skin from tearing and to aid in gripping objects.

This dermis contains most of the skins’ specialized cells and structures, including:

The blood vessels of the circulatory system supply oxygen and nutrients to the skin and remove cellular waste and products. The blood vessels also transport the hormone vitamin D back to the rest the body.

The lymph vessels immerse the tissues of the skin with lymph, a milky substance that contains infection-fighting cells. These cells serve to eradicate any infection or invading organisms as the lymph circulates through the lymph nodes.

The hair follicles are tube-shaped sheaths that surround the part of the hair under the top layer of the skin and nourishes the hair.

Stress and the Hair Follicle

A person has millions of sweat glands, or sudoriferous glands. The sweat glands are a type of gland called an exocrine gland, meaning they produce and secrete substances onto an epithelial surface through a duct. Sweat production, or perspiration, is dependent upon temperature and humidity levels, type of clothing worn, and activity levels. Water loss through skin—both insensible perspiration, perspiration that occurs before it is perceived, and sweating—can range from 0.3 L/h in sedentary conditions to 2.0 L/h in high activity in the heat. Children’s sweat production is less before puberty. Sweating to an unusual degree is called diaphoresis.

Apocrine glands are specialized sweat glands that secrete a milky fluid that provides a perfect environment for the growth of the bacteria responsible for body odor. Apocrine sweat glands are found only in certain locations of the body—highly populated areas are the armpits, external genitalia, and perianal region. The secretions of the apocrine sweat glands contain lipids, including triglycerides, cholesterol, and fatty acids to name a few. The Apocrine glands are principally controlled by anxiety, stress, fear, pain, and sexual arousal.

Eccrine glands are the major sweat glands found all over the body, with the highest density on the palms and soles. These glands regulate the body’s temperature, known as thermoregulation, by bringing water, via the pores, to the surface of the epidermis, where it can evaporate and cool the skin’s temperature. The Eccrine glands emit mostly water—it may become odiferous, or have odor, as a result of diet or disease. The eccrine glands are also responsible for emotionally induced sweating.

Puberty – What Is That Smell?

Rise of Hygiene, Rise of Inflammation

Sebaceous glands secrete an oily, waxy substance called sebum that is responsible for lubricating, waterproofing, and nourishing the skin to keep it soft and flexible. Sebaceous secretions in conjunction with the apocrine glands play an essential thermoregulatory role. During hot conditions, the secretions emulsify the sweat—this produces a layer of sweat on the epidermis that is not readily lost by evaporation, thus delaying dehydration. In colder conditions, the nature of sebum becomes more lipid to coat the hair and the skin. The acidity and antimicrobial lipids of the sebum aid to ward off harmful microorganisms. Additionally, the secretions provide vitamin E to the upper layers of the facial skin.

Why Is Vitamin E Important to the Skin?

The dermis layer contains pain and touch receptors that transmit sensations of pain, itching, pressure, and information regarding the body’s temperature to the brain for analysis. As an example, shivering, an involuntary contraction and relaxation of muscles, is triggered, to generate body heat.

How We Sense Temperature – Science Experiment Anyone Can do

Collagen is a tough, insoluble protein that holds the dermis together. Collagen is made by fibroblasts, which are the skin cells that provide strength. Collagen is throughout the body in the connective tissues that hold the organs and muscles in place. In the skin, collagen supports the epidermis. Elastin, a similar protein, is the substance that enables the skin to spring back into place when stretched.

Changes in the Aging Skin

The hypodermis, or subcutaneous layer, is the innermost layer of the skin and contains a network of collagen and fat cells. It functions as both a shock absorber, protecting the inner organs, and an insulator, conserving the body’s heat. It also stores fat as an energy supply for the body. The hair follicles, blood and lymph vessels, and nerves cross through this layer. The thickness of the subcutaneous layer is different from person to person.

Skin Conditions of the Integumentary System

Please contact us at support@pacificmedicaltraining.com to reach the author and recommend other conditions that interest you.

Skin Color and Texture in Diagnosis

How to Prevent Common Skin Disorders

Understanding the Cause of Skin Disease

The Relationship of Diet and Acne

The Link Between Antioxidants and Healthy Skin Aging

Skin Care in the Aging Female – Myths and Truths